In a derelict squat, the Smart Man watches as the new narcotic developed by his shadowy organisation wreaks havoc on it, unsuspecting victims. The drug is now ready for sale on their exclusive darknet marketplace.

Elsewhere, DCI Robert Smith, the retired head of the Cyber Crimes Unit, seeks out crime boss Curtis Slater at his remote farm. He offers to provide Slater with information in exchange for money. But what information is he offering?

Meanwhile, former detective Pete Harris had started a new life, away from the Cyber Crimes Unit, with his daughter and begins to rekindle his relationship with old colleague Grace Brooks.

With his life seemingly complete, Pete’s world comes crashing down as he is drawn into Slater’s game with fatal consequences. He must join forces with his old enemies in a race against time. But can Pete save his daughter and Grace from the clutches of Slater, the Smart Man, and the sinister ringmaster, the Professor?

The Edge of Sanity is a dark and twisty psychological thriller. It can be read as the sequel to the critically acclaimed Enter The Dark or as a thrilling stand-alone. It will appeal to fans of authors like JP Delaney, Mark Edwards and James Swallow.

Due to some health issues recently, I have not been able to read this book in time for the tour, but I will be rectifying this soon! Instead, I am so excited to bring to you the first chapter in the book…..and it is a stonker that is for sure!!!! It is has a rating of 4.03 on Goodreads so it is going to be one hell of a ride.

The Smart Man stared, cold and emotionless, at the wretched figure rocking back and forth on the scummy brown armchair in the middle of the room. As the single shade-less bulb hanging from the ceiling flickered, an old analogue clock on the wall ticked and a slow leak dripped from the roof onto the hard, bare concrete floor. Every few seconds, their dissonance became briefly synchronised into a single beat, before separating again into randomness.

The young man on the armchair shook his head, his claw-like fingers quivered as he raked them through his thick matted blond hair. He stared at the small packet of blue powder on the coffee table in front of the armchair, sweat pouring down his face, and he chewed on one of his filthy brown fingernails.

It had been two days since this man had forced his way into the dingy bedsit that Stephen shared with his equally drug-addled girlfriend Cherry. He had pointed a gun at Cherry’s head as she lay in a semi-conscious stupor and very calmly told Stephen, “In this bag I’m holding is the latest batch of our new recreation enhancement, working title ‘Drone Strike’. Personally, I don’t like the name. I would have preferred something more light-hearted like ‘Brainfood’ or… ‘Blue Candy Floss’ or… ‘Pointless scum-of-society brain-fucker’. But, hey, my organisation went with their name and so be it. It’s just like the regular mephedrone-based crap that you two pump into your veins on a daily basis, except it’s purer, almost super-charged if you will. One for the connoisseurs I’d say, which once it hits the streets would be way out of reach of the regular gutter-crawlers like you. But you, my friend, you have been chosen to be the lucky recipient of the very first bag.”

Stephen stared at the man. His dark grey single breast suit, crisp blue shirt and yellow stripy tie, he looked more like an estate agent than a drug-pusher. Which messed with Stephen’s brain. Usually at this point in his come-down, his ability to talk endless amounts of bullshit was legendary, but on this occasion his brain struggled to muster any sort of coherent response. Other than to stand up and make a break for the door. But the echoing clickof a gun being cocked stopped him and, once he saw the black hole at the end of the barrel pointing straight at his face, he quickly changed his mind.

“Stephen,” the man said, taking him aback somewhat since he had no idea how this man knew his name, “I would happily kill you. Then kill her. Then walk out of here leaving you both to rot in your own filth. So I suggest you sit back down, make yourself comfortable and we get to know each other a little better.”

Stephen stood firm, one hand on the door, the other subconsciously raised in surrender. As he held his arm out, he subtly tried to lower the handle as slowly as he could manage.

The Smart Man sighed and replaced the barrel of the gun to the side of Cherry’s exposed neck. He simply shrugged, enough for Stephen to release his grip on the door and go back and sit down.

“Why… why us?” Stephen stammered, his teeth grinding between every other word. “Why can’t you just leave us alone? We’ve got nothing; we just sit here all day not bothering no one.”

“Spare me,” replied the Smart Man. “I’ll attempt to keep this as simple as I can for you. We know that you buy copious amounts of mephedrone so we figured that you would be the perfect candidate to try our new deluxe version. In a couple of days, you will take it, I’ll watch what happens, and then I’ll walk out of your life and you will never see me again. Sorry, does that sound a little melodramatic?”

Stephen sobbed quietly. He rubbed his hands over his face and through his hair, wishing he could make more sense of the situation than the final strains of his hit two hours earlier would allow. He was starting to wish he had snorted the whole lot in two massive lines. Instead he chose to dab it to make it last. At least he would still be vaguely buzzing when confronted with this nutter, rather than his current predicament of drowning into one huge paranoid shit-heap.

“So, okay,” he said, snorting a huge lump of phlegm down the back of his throat. “Look, dude, it sounds fun, right? Just, you know, don’t hurt me or Cherry. Okay? Dude?”

The Smart Man released the pistol and unbuttoned his jacket. Stephen caught sight of the very expensive-looking maroon satin lining as he replaced it in the inside pocket.

“Good boy. I’m glad that you have seen sense,” the Smart Man said, making his way over to the armchair. He stood in front of Stephen, pulling his black leather gloves tighter onto his hands before swiftly bending down and grabbing Stephen by the throat. “And let’s get one thing straight. If you call me ‘dude’ one more time, I will rip your throat out and stuff it down that tart’s gob.”

Stephen choked as the pressure caused the almost constant supply of mucus the result of relentless daily snorting to climb back up in his throat and he gasped for air.

After a few seconds, he was released and inhaled violently as he rubbed the skin on his neck which had already come up in a bruise.

The Smart Man stood up straight, clapped his hands and walked over towards the corner of the room to the small sink unit and filled up the kettle. “Don’t know about you, Stephen, but I’m parched.”

Stephen silently shook his head. “I won’t last two days without a hit of something. I’ll go fucking ape-shit. And Cherry, when Cherry comes round, she’s always got the”

But his sentence was cut off by a loud slam of the fridge door followed by a teacup smashing against the opposite wall. “Fucking actual hell!”

Stephen turned, startled, his heart which was already beating in the high nineties somewhere, suddenly went into overdrive.

“What is it with your type?” shouted the Smart Man. “I get that you turds of society have nothing better to do than fill yourselves full of whatever shit you can stick in a syringe and shove down your Jap’s eye, but is it really beyond the scope of all human comprehension that you might, just might, have some fucking milk in the fridge?”

“S… s… sorry. There might be some vodka kicking around somewhere.”

“Vodka? In tea? What kind of hideous shit are you taking, Stephen?”

“No,” he said, his nervousness heightened by his over-the-top heartbeat. “I meant instead of tea. Not in it. I don’t think we have any teabags either.”

“I brought my own. We’ll have to get rid of any alcohol. The drug must be taken sober and I don’t want you sneaking some when I’m not looking. It’ll be hard enough keeping you off the drugs for two days.”

“I can’t do nothing, not for that long. I said I’ll go fucking mental.”

“Yes, I vaguely remember you mentioning that a moment ago,” said the Smart Man as he squeezed the teabag between his thumb and forefinger before discarding it on the floor. “Those are the rules I’m afraid. Our buyers are very particular during the testing phase that the pigs, sorry I mean guinea pigs, meaning you, aren’t contaminated by any other, how shall we say, ‘inferior product’.”

The Smart Man stood back next to the sofa on which Cherry lay, quickly checked his watch and then retrieved the gun from inside his jacket which he pointed downwards at the girl’s head as he took sips from the mug in his other hand.

“We,” replied the man between sips, “sit here and do nothing until precisely forty–seven hours and fifty–eight minutes from now.”

Well if that first chapter does not get your reading juices going…I don’t know what will!

Chris Thomas was born near London in 1978 before moving to Buckinghamshire a few months later. He attended the University of Bristol, graduating with a degree in psychology in 1999. It was here that he developed his interest in criminal psychology and serial killers.

After a brief stint working at an investment bank in London, he left the City to work for his wife’s family business, a position he still holds.

Chris is an avid film fan, especially horror, thrillers and dark comedy- something that he tries to blend in his writing. He self-published his debut novel The Red Room in February 2017 before joining the Bloodhound Books stable and re-releasing the book as Enter The Dark.

The follow up, “The Edge of Sanity”, will be released by Bloodhound Books in August 2018.

In his spare time, Chris enjoys karate (holding a black belt) and spending time with his wife and two young daughters. 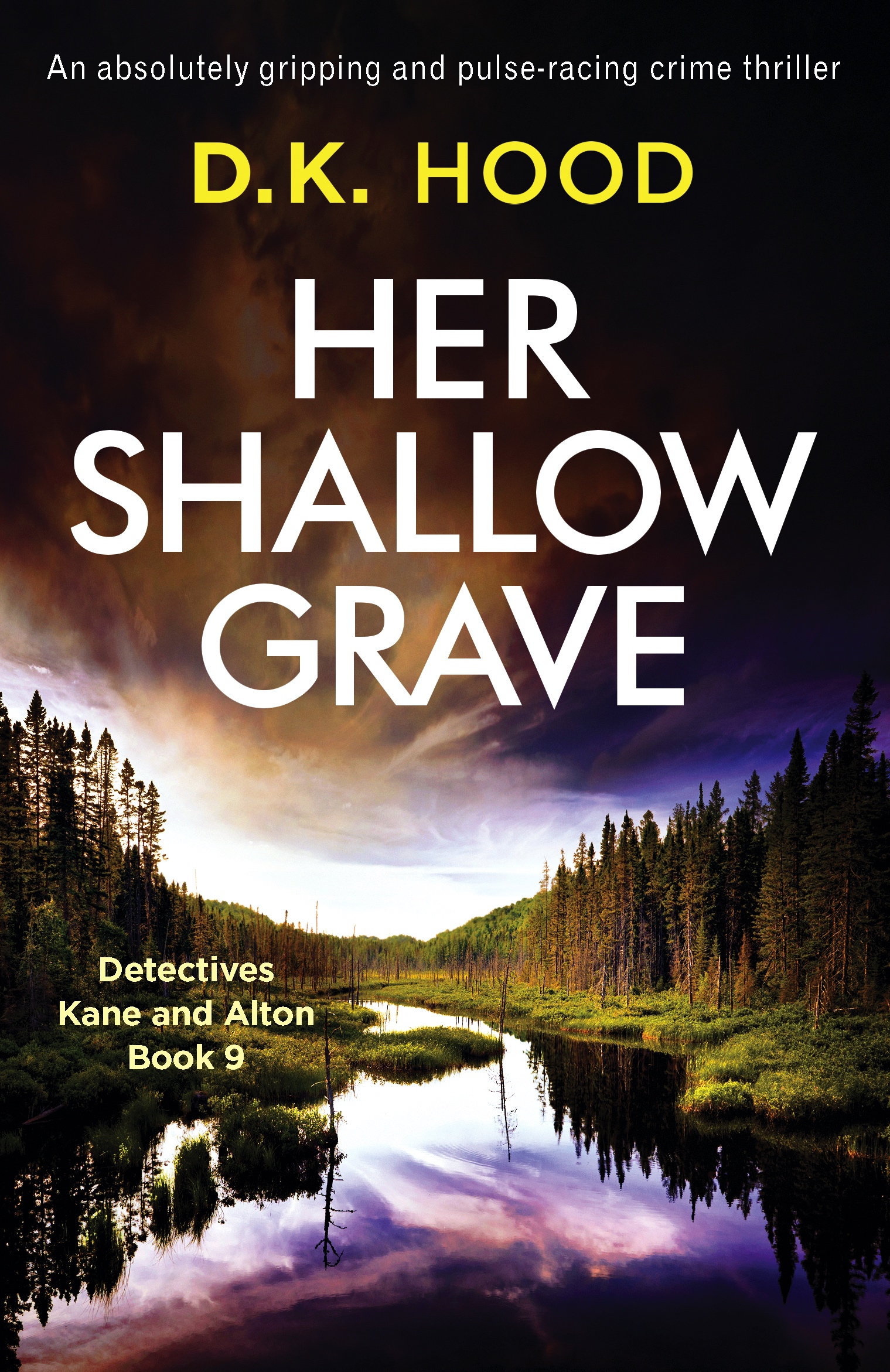